Thursday, June 2nd is National Gun Violence Awareness Day—a day where we’re asking millions of Americans to wear orange to signify their belief that we can do more to save American lives from gun violence. 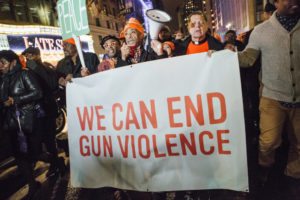 Chi-Raq Orange March
Following the world premiere of Spike Lee’s new film Chi-Raq, which calls attention to the gun violence crisis in Chicago and nationwide, members of the cast, attendees of the premiere and activists will participate in an “Orange March” – a show of support to help #EndGunViolence.
Everytown Against Gun Violence
December 1st, 2015

On this day, ‘Moms Demand Action’ and ‘Everytown for Gun Safety‘ are organizing ‘Wear Orange’ events across the country (click here for more about the Wear Orange campaign). With special guests, a photo booth, facepainting, and more, this will be a fun event for everyone!

The background of this day of Wearing Orange comes from hunting culture, where hunters wear orange in the woods to protect themselves and others. Orange signifies the American heritage of responsible gun ownership and the importance and value of protecting human life. June 2 is also the birthday of Hadiya Pendleton, the Chicago teen who was fatally shot the age of 15 just weeks after performing at President Obama’s second inauguration. So the event is both an effort to promote gun sense as well as a celebration of Hadiya’s life.

We are grateful to Sixth Presbyterian Church for agreeing to host Pittsburgh’s Wear Orange event outside of the church on Thursday, June 2. We will have a table with orange-themed giveaways for pedestrians, along with information about what more people can do to promote gun sense. We will also use this as a meeting point where Moms Demand Action members—as well as interested members of Sixth—to gather in their orange clothing showing their support. Please join us!

Worship begins at 11 am, both in-person and streaming.

Masks are required in the building while Allegheny County is in a “medium” or “high” CDC community risk designation; N95 or similar masks are preferred while in “high.” Masks are welcome and recommended while in “low.“